The Wiki of a Teenage Robot
Register
Don't have an account?
Sign In
Advertisement
in: Episodes, Season 2 Episodes, Specials,
and 2 more

A Robot For All Seasons

View source
watch 01:40
The Sandman Will Keep You Awake - The Loop
Do you like this video?
Play Sound

A Robot For All Seasons

A Robot For All Seasons is the fifth episode of season 2 of My Life as a Teenage Robot. It is a Christmas special and premiered on December 8, 2004 in the United States.

During Christmastime, Jenny meets a child named Todd Sweeney — a spoiled brat who acts like a poor do-gooder. He kidnaps and programs Jenny to do a whole year of villainy, wrecking all holidays... up until his plan to eliminate Christmas, his most hated holiday. If Jenny can't find a way to stop this pint-size grinch, it's not going to be a Merry Christmas for anyone!

On Christmas Eve, a robotic Santa zips by hundreds of homes around the world, leaving presents for the children. The robot turns out to be Jenny, who took over the role of Santa after the latter got into a mysterious accident that broke every bone in his body. Jenny returns to the North Pole and she, along with Dr. Wakeman, Brad, Tuck and Sheldon, celebrate Christmas by having a day-long feast with Santa at his palace. Afterward, they decide to spend the day after at the Tremorton mall.

At the mall, Jenny meets Todd Sweeney, a gloomy child in a suit, who is depressed about not getting what he wanted for Christmas. Believing she missed his house while helping Santa deliver toys, Jenny tries to make it up by asking him what he wants for Christmas. Impressed with her transforming gadgets (which she used to help Tuck get past a crowd of people and to the toy store), Todd decides to “buy” her as a live robot action figure, which she agrees to, but only for one day. She soon discovers that Todd comes from an extremely wealthy family, but, as he says, "Money can't buy happiness."

At his mansion, Todd puts an antenna on Jenny’s head, and she pretends to be his robot servant. She is surprised to see Todd’s many toys, originally believing he never gets anything for Christmas. Todd says he never gets what he wants, which isn't toys or love, but weapons, much to Jenny's shock. He transforms the living room into an evil laboratory and zaps Jenny with his remote, causing her to pass out. Sometime later, Jenny reboots and awakens, strapped to a table. She frees herself, and fights past Todd's butlers and security doors, narrowly escaping the mansion.

On her way back home, Jenny sees people preparing for Christmas despite it supposedly being the day after. To make things more strange, everyone cowers in fear when they see her, including Tuck. She is then attacked with snowballs by a group of teens led by Brad, and almost short-circuits. She makes it back home, where Wakeman (who is working on a new XJ-10 robot model) is shocked to see her. While initially trying to comfort Jenny, Wakeman subdues her daughter with a giant electromagnet and calls Skyway Patrol. Feeling betrayed, Jenny escapes and flees to her room, but is attacked by a Skyway Patrol helicarrier. During the arial attack, Jenny is badly damaged and collapses to the ground. She continues fleeing from the Skyway Patrol, on foot, through the city.

She eventually runs into Sheldon, who doesn't react to her with fear or hostility, much to her delight. The two take shelter in the storm sewer, and Jenny asks Sheldon why everyone is acting so strangely. He reveals that she had been gone for almost a year since leaving with Todd, and only came back to destroy all the major holidays, such as New Years, Halloween and the Fourth of July, for everyone in town, which resulted in her being declared “Public Enemy #1”. Sheldon, however, believed her actions were either a result of mind control or an evil twin (the former being correct). Jenny then realizes that Todd had been controlling her all this time and sets out to clear her name.

She returns to Todd's mansion and confronts him over making her destroy the holidays. Todd explains that his parents went on a vacation to Bermuda many Christmases ago and soon retired, leaving him alone with his butlers, leading to his bitter attitude. He resolves that if he can't enjoy the holidays, then neither will anyone else on Earth. He now plans to ruin Christmas, “the fattest of all the holidays” (as he puts it), by destroying Santa for good. He then takes control of Jenny once more and uses her to travel to the North Pole.

Meanwhile, Wakeman, Brad and Tuck plan to go to the North Pole to stop Jenny from destroying Christmas. Sheldon tries to convince them she's innocent, but to no avail.

At the North Pole, Todd uses Jenny's array of weapons to bypass the elf guards, eventually making it into the palace. A fight ensues between Santa and the mind-controlled Jenny, with the latter triumphing. Todd then reveals himself to Santa as "the boy who destroyed Christmas" and that he was responsible for his injury last year. Before he can finish Santa, and ruin Christmas forever, Jenny suddenly reverts back to her normal self and gives Todd a spanking. Nora, Brad and Tuck soon arrive, but are shocked to see no fighting. Jenny reveals that Sheldon disabled Todd's mind-controlling remote, and she only faked being controlled to get him to confess his misdeeds to Santa, restoring their faith in her. Unfortunately, all of Tremorton’s presents were destroyed in the fight.

In an attempt to fix the damages, Jenny and the others decide to give the kids Todd's unwanted toys and presents, as well as show him the gift of giving rather than receiving presents. When Todd gives a toy to a happy kid, his gloominess literally cracks away and he becomes happy and joyful, reformed. His parents suddenly return, saying they had not retired but were tired and needed a longer vacation, and they wanted to bring back the perfect gift for him. However, Todd realizes and admits they are all he really wants, as Christmas is about family not presents, which they agree to.

As a token of gratitude for having never lost faith in her, Jenny gives Sheldon a mistletoe kiss on the cheek, which leaves him literally frozen with shock. The episode ends with everyone, including Todd, singing "We're Spending Christmas with Santa/Jenny" (while Tuck frantically breaks the fourth wall, questioning who they're singing to, and how they managed to sing perfectly without practice). 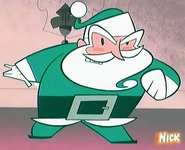 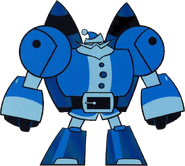 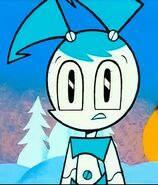