Armagedroid is an antagonist in in the My Life as a Teenage Robot series. He is voiced by Kevin Michael Richardson.

He is Jenny's most powerful brother, designed by Dr. Wakeman about 20 years before Jenny’s creation in order to protect Earth from alien invaders and destroy their weaponry. He is the size of a city block and possesses an arsenal of weapons, all of which to serve his programmed duty of disarming and destroying enemy weaponry. Armagedroid was, for his time, the most advanced and powerful robot ever created.

Armagedroid was built by Dr. Wakeman during the first major intergalactic war between Skyway Patrol and a massive invasion of various alien attackers. Unfortunately, after the alien attackers were deflected, Armagedroid grew restless during the time of peace and took all of the weapons he could find, even the Skyway Patrol's weapons. Being unable to discern friend from foe, he began to destroy Earth's own weaponry out of a righteous crusade. Dr. Wakeman managed to convince her creation that the ultimate weapon was hidden at the core of the planet, and he dug himself down through Earth's crust and into the magma. Armagedroid was supposedly consumed by the heat of the Earth’s core and deemed gone forever.

However, twenty years later, in the episode of the same name, he returned to the surface, apparently having ascertained that there were no weapons within Earth's core. Once he returned, he promptly tried to destroy all of the weapons on Earth by throwing them into the massive furnace in his core, where they would melt. He was soon confronted by Jenny, but he easily overpowered his "little sister" and nearly destroyed her completely due to all of the weapons contained within her. Tuck and Brad save her and take her to Dr. Wakeman. Wakeman then explains to them that she formerly worked with Skyway Patrol and that they needed an ultimate weapon during the first intergalactic war. When Armagedroid began rebelling against Earth by taking all of mankind’s weapons, Wakeman had attempted to trick him into going to the Earth’s core and melting himself. After the incident, Dr. Wakeman started the XJ Series to replace him as the protectors of Earth.

Once Jenny is revived, Dr. Wakeman comes up with a plan to stop Armagedroid once and for all. Thankfully, in his restless search for weapons to destroy, Dr. Wakeman and Jenny managed to trick him into ingesting a proton bomb, planted inside Jenny, into his internal melting oven, causing him to explode. When Armagedroid exploded, with his head still intact as he was blasted into deep space, he swore he would return and destroy all of the weapons on Earth, even if it meant destroying Earth itself.

Later, in Enclosure of Doom, Armagedroid did return, having been rebuilt by the diminutive Killgore in a joint-effort towards revenge on Jenny (though it was never revealed how it was even possible for Killgore to have accomplished this incredible feat). Once again, Jenny proved that Armagedroid's worst enemy was himself, as she convinced him that he himself was a weapon. With no clue as to self-preservation or irony, Armagedroid became confused and literally tore himself apart upon hearing those words. He was never seen or rebuilt again afterward. 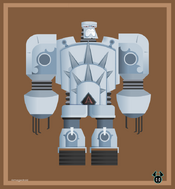 Official character art of Armagedroid
Add a photo to this gallery

Retrieved from "https://teenagerobot.fandom.com/wiki/Armagedroid_(character)?oldid=18719"
Community content is available under CC-BY-SA unless otherwise noted.