The Wiki of a Teenage Robot
Register
Don't have an account?
Sign In
Advertisement
in: Characters, Humans, Living Characters,
and 4 more

My Neighbor was a Teenage Robot (First appearance)

It Came From Next Door (in the series)

Bradley “Brad” Carbunkle is the secondary protagonist in My Life as a Teenage Robot. He is Jenny's best friend and next door neighbor.

Brad made his debut appearance in the pilot episode "It Came From Next Door". He is first seen reading a magazine outside in a lawn chair. He also drives a white 1995 crown victory p71.

Brad is a human adolescent male with apricot-colored skin, spikey red-orange hair, and dark-colored eyes. He usually wears a white dress shirt with a black vest over it, khaki pants, and black dress shoes.

Brad is known to be very adventurous, and enjoys tagging along when Jenny fights crime. He is also known to be a ladies' man and he tries to get other girls to like him; however, many of the girls he tries to flirt with reject him. Brad dislikes being on the sidelines. Brad is also observed on many occasions as being stubborn. In Unlicensed Flying Object, Brad portrays his more stubborn side of his personality by disregarding his safety having been told not to interfere with anything dangerous. He also has been observed as being slow or unperceptive, which sometimes annoys Jenny.

Brad and Jenny met in the pilot It Came From Next Door. Brad and Jenny have a close friendship and spend a lot of time hanging out together, as well as occasionally teaming up to fight off villains.

Neither of the two display any romantic feelings for each other. In the episode Ball and Chain, when Brad was about to marry Space Bikers member Tammy, Jenny broke into the wedding chapel to rescue him. When Brad told Jenny that he actually wanted to marry Tammy and become a Space Biker, Jenny humbly respected his wishes, but told him sadly that she would miss him, wished him luck, and then gave him a small goodbye kiss on the cheek before walking out. Despite this display of friendly affection, their relationship throughout the series has remained strictly platonic.

In a Q&A with Rob Renzetti, he clarified that he had no long-term plans for Jenny's love life, which he considered a minor part of the show anyway. [1] However, he did comment in an earlier interview that he was rooting for Sheldon (not Brad) in regards to Jenny’s potential love interest. [2]

Tuck is Brad's younger brother. Since they both have different personalities, they occasionally argue, and display typical sibling rivalry. Despite all this though, they do share a mutual brotherly love for each other. Even when Tuck is annoying most of the time, Brad cares about his younger brother very much, and tries his best to keep him safe from danger.

Dr. Wakeman and Brad don't talk to each other often, but in times when Jenny needs help, are often working together (typically along with Tuck and Sheldon). Dr. Wakeman must constantly interrupt Jenny and Brad when the friends are spending time together because Jenny has duties to protect Tremorton and the Earth from danger.

Sheldon and Brad are good friends. They often talk to each other in school, spend time together usually when Jenny is around, and go on wild and occasionally dangerous adventures with her. Brad is kind to Sheldon and gives advice to him when he is in doubt.

Melody is one of Brad's genuine love interests. Even though she is the robot daughter of the evil mad scientist, Dr. Locus, Brad still falls for Melody, seeing as she appeared as a pretty and perfect normal girl in her exo-skin. In Bradventure Melody helps Brad safely escape her father's lab with an injured Jenny. When Melody visits him again in No Harmony with Melody, Brad remembers his feelings for her, and decides to take Melody around his town as a date. Melody was the first girl in the series to be seen kissing Brad. Jenny, convinced that Melody was evil like her father, and up to no good with intentions to harm Brad, provokes Melody, causing her explode with rage and reveal her true hideous and monstrous robotic form. Realizing that everyone thought she was a monster, including Brad, Melody gives up, feeling that she will never belong. She flies away in tears, never to return. Brad was quite sad about Melody’s tearful farewell in the end, as he had enjoyed being with her, and returned her feelings for him.

Brad is always willing to help keep Jenny safe from and help fight against The Cluster's attacks, and dislikes them as Jenny does.

Brad dislikes Queen Vexus as Jenny does, and is afraid of her as well. However, when she was in disguise at Tremorton High as "Vicky" in Queen Bee, Brad became a huge fan of her, fooled like everyone else in the school.

Brit and Tiff are popular rich girls of Tremorton High School who only associate with the popular boys, such as Don Prima; hence, they dislike Brad and consider him a nerd. They are especially disdainful of Brad and rude to him, considering he is one of Jenny’s friends (along with Sheldon).

When they first appeared in The Return of Raggedy Android Brad disliked the Space Bikers, seeing as they attacked all of his friends when they crashed Mezmer's, and gave him an atomic wedgie. Tammy in particular seemed to target him, bully him, and rough him up while seemingly flirting with him. This eventually lead to his biggest problem with the Space Bikers, which occurred in, Ball and Chain, in which Brad was forced by the Space Bikers to marry Tammy. At first, Brad was very much opposed to this forced wedding and tried to get out of it, but changed his mind when he considered the life of a Space Biker to be exciting, while also developing a crush on Tammy. In the end, when he was told that he would be Tammy’s slave once married to her, Brad tried to break off the wedding, and is nearly eaten by Tammy (one of the traditions within the Space Bikers’ group, if the groom wants to end the marriage — the wife eats him). He is rescued by Jenny just in time, and does not have any more encounters with Tammy or her fellow Space Bikers.

Brad as he appeared in "My Neighbor Was A Teenage Robot". 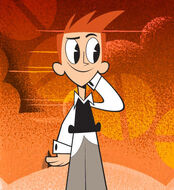 Brad and Tuck as they appeared in the Pilot