The Wiki of a Teenage Robot
Register
Don't have an account?
Sign In
Advertisement
in: Female Characters, Characters, Villains,
and 2 more

Brittany 'Brit' Crust is one of the Crust Cousins, along with Tiff Crust, two fashionable school bullies whom Jenny often clashes and competes with at Tremorton High School.

She is voiced by Moira Quirk, and speaks with a posh London accent.

Brit is a cousin to Tiffany 'Tiff' Crust. She and Tiff are the most popular girls in Tremorton High School. They despise Jenny and her friends: Brad Carbunkle and Sheldon Lee. The Crust Cousins scorn and bully nerds (though they are truly fearful of them).

One of their best friends is Pteresa, another girl in their clique who is also a bully. They also associate with the most popular and fashionable boy in school, Don Prima, even though he cares about himself more than girls.

Brit took advantage of Jenny’s naivety when they first met, laughing at her behind her back with Tiff and the other popular girls, passive-aggressively refusing to allow Jenny to associate with them, and trying to embarrass her in front of the entire school. She offen insults and bullies Jenny due to an incident that occurred in Class Action that exposed her and Tiff’s vengeful and dangerous behavior and got both cousins escorted by the police. Ever since, Brit swore to make life miserable for Jenny, with the help of Tiff.

In Pajama Party Prankapalooza, she and Tiff hosted a sleepover party and invited Jenny just to make a fool out of her and get her in trouble, tricking her into believing they had accepted her into their popular circle. Brit and her cousin Tiff only helped Jenny in Queen Bee when Vicky came to Tremorton High and became more popular than her and Tiff.

Brit is a slim, tall, dark-skinned girl with buckteeth (opposed to her cousin Tiff, who is rather thickset with a fair complexion). She has slick, retro-styled black hair that matches her eyes, and an obvious overbite. Though Brit is often sporting the latest fashion trends and changing her wardrobe constantly, she is most commonly seen wearing a posh dark magenta high-collared coat with four black buttons, black pants, black gloves, and black boots.

Brit is typically depicted as selfish, a braggart, and a very popular individual. She is posh and sophisticated, always wearing the latest fashion trends. She is snooty, arrogant, cruel, vengeful, and vindictive. Like Tiff, she is also sadistic in that she very much enjoys bullying and humiliating Jenny.

While Brit is the brain behind their shennanigans to torment Jenny, Tiff is the muscle. Brit is cunning, shrewd, and manipulative, typically coming up with clever ways to humiliate her enemies (namely Jenny). 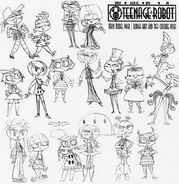