The Wiki of a Teenage Robot
Register
Don't have an account?
Sign In
Advertisement
in: Characters, Robots, Aliens,
and 5 more

The Cluster are the secondary antagonists of My Life as a Teenage Robot. They are an empire made up entirely of robotic organisms, and see themselves as superior to biological life-forms such as humans.

The Cluster are centered on the planet of Cluster Prime, a planet completely inhabited by robots. The type of robots (known as Cluster Drones) that make up most of the army are beetle-like droids led by Smytus as their commander, and Vexus as their queen. Krackus is a known part of the Cluster, aiding them from time to time, although poorly with his inventions that fall apart or are easily destroyed.

There are some instances where the Cluster has used advanced androids and other types of robots in their attempts to seize Earth. In Escape from Cluster Prime, the Cluster began their invasion with very small attack bots that were invented by Krackus. When Krackus’ scheme failed, Commander Smytus successfully overtook Earth, using his more powerful drones to overthrow and imprison humans for a short time before Jenny was able to save the planet.

The Cluster fell apart when Jenny came to Cluster Prime and helped liberate the people from Vexus’ hands. It is unknown what had happened to the rest of the army as every citizen on Cluster Prime has powers to match Jenny, with Vega saying, "We are no longer affiliated with those droids."

After the fall of the Cluster, Vexus, Smytus, and Krackus had been cooperating on waste asteroids. Despite Vexus’ Cluster army being scattered, she continued to seek revenge on Jenny by herself (as seen in the episode Queen Bee).

Jenny fighting off the Cluster Drones, as Queen Vexus watches.

Standard red and green Cluster Drones as seen here in "Killgore" and other episodes.

Two Cluster Air Force Drones, after dropping down from the air with standard laser guns. 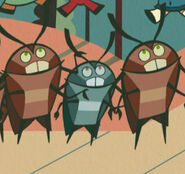 Standard Cluster Drones with one blue, an uncommon color as seen in "Escape from Cluster Prime"

Cluster space ships as seen in "Escape from Cluster Prime"
Community content is available under CC-BY-SA unless otherwise noted.
Advertisement