The Wiki of a Teenage Robot
Register
Don't have an account?
Sign In
Advertisement
in: Episodes, Season 1 episodes, Cluster Story Arc, 2003

Hostile Makeover is the first half of episode 9 of season 1. It first aired on Nickelodeon in the United States on October 24, 2003.

When Jenny starts to develop face-bolts, voice changes, mood swings, and excess wires growing out of her underarms, Brad chalks it up to puberty. However, it soon becomes apparent that the "puberty" is actually the doing of Queen Vexus of the Cluster, who has infected Jenny with a virus-like nanobot to warp her into a loyal, Cluster-controlled monster.

After battling off a group of Cluster Drones, Jenny faces off with Vexus. Vexus manages to escape by gassing Jenny with a cloud of green gas. As Jenny coughs on the cloud of gas, a small robot finds its way inside of her and proceeds to bite Jenny in her innards. Jenny, unaware that the robot is inside of her, rockets off to school. In class, Brad reminds Jenny that Picture Day is tomorrow and informs her that he wishes to be zit-free for his photo, bringing Jenny to mention that she never has to worry about breaking out. Just then, a bolt appears on her forehead, acting as a robotic "zit". She then screams, and blasts through the roof.

Back at home, Jenny attempts to remove the bolt from her head by unscrewing it. It then reappears, larger than before. When Brad and Tuck come to visit, Brad concludes that the bolt is a sign of Jenny undergoing "robo-puberty." Tuck, however, says that bolt is the first sign of some sort of infection from a tiny alien machine, and that the infection will turn Jenny into a monster. As Brad dismisses Tuck's outlandish claims, more bolts emerge on Jenny's head. Brad then offers Jenny some coverup to hide the bolts.

That same night, Brad and Jenny head over to Mezmer's. Jenny is hesitant to be seen in public for fear of her bolts being noticed. She is then snickered at by other customers due to the coverup being a different shade from her metallic body. After a period of humiliation, Jenny's voice chip malfunctions, making her voice deeper than usual. Embarrassed, Jenny runs off into an alley with a paper bag over her head.

Brad finds Jenny and tries to comfort her, all while the small robot inside of her body starts manipulating her emotions by biting and switching around her inner wires. Brad interprets Jenny's erratic behavior to be mood swings. Jenny finally decides to take off the paper bag, only to reveal her face has been deformed. At the same time, Jenny's body starts to undergo drastic changes, including underarm wires to appear, her stomach and chest growing larger, and her arms becoming bulkier. Even more embarrassed, Jenny flees back home.

The next day, Jenny goes to school for Picture Day, now transformed into a Neanderthal-like monster. On her turn for her picture, the flash from the camera causes Jenny to go red-eyed and berserk. The photographer is then revealed to be Vexus, who orders the now mind-controlled monster Jenny to destroy the rest of the school. Brad tries to reason with Jenny to no avail. Tuck and Dr. Wakeman then arrive and try to set Jenny straight by short-circuiting her by attaching car jumpers to her and a power box. When Tuck tries to reach for the power box, Vexus grabs hold of him to prevent Jenny from reverting back to normal, causing him to scream. Hearing Tuck's horrified cries, Jenny becomes distracted, allowing for Dr. Wakeman to attach her pair of jumpers onto her. Once the second pair of jumpers are attached to the power box, Jenny then short-circuits, completely immobilizing her, and releasing the nanobot that was taking control of her. Nora explains this, using the same theory Tuck described earlier. Tuck gloats to his annoyed brother of him being right this whole time.

With the nanobot out of her system, Jenny then reverts back to normal. When Vexus refuses to release Tuck, Jenny warns her that she will destroy her nanobot if she doesn't let him go. Not wanting her nanobot destroyed, Vexus trades Tuck for it and flees back to her dimension, stating she will return to Earth, and someday soon Jenny will join the Cluster family.

Soon after, Picture Day proceeds as normal and Jenny gets her picture taken, but she becomes slightly embarrassed when, in the year book, she sees her picture with her belly hatch busted wide open.

Brad: My only battle today is between my urge to gorge on chocolate and my desire to be zit-free for school photos tomorrow. (sees a huge chocolate bunny) Foul temptress!

Jenny: That's one good thing about being a robot--you never have to worry about breaking out. (A bolt appears on Jenny's face and she looks up) AHHHHHH!

Jenny: I... I tried to unscrew it, and it just got bigger!

Brad: C'mon! Nothing to freak about.

Jenny: But I'm a hideous mutant!

Tuck: (after hearing his theory was right) My wild imagination, huh?(Brad gives Tuck an annoyed look about him being right) 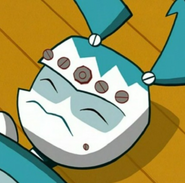