The Wiki of a Teenage Robot
Register
Don't have an account?
Sign In
Advertisement
in: Characters, Robots, Living Characters,
and 4 more

No Harmony with Melody

Unknown (designed to be a teenager)

Melody Locus is the robot daughter of Dr. Locus. She first appears in Bradventure, where she develops a crush on Brad. She returns a second time, running away from her father, in No Harmony with Melody. She is voiced by Sandy Fox.

Melody has an exo-skin that gives her the appearance of a pretty normal girl with light blonde hair in two drooping pigtails and large blue eyes. She wears a green and blue dress and black flats. When Jenny provokes her, she unveils her true self, a large spiny robot with an ugly and horrific appearance. Her true form terrifies everyone in Tremorton, including Brad.

Melody appears to be a shy and caring person who just wants to be a normal robot girl (like Jenny). However, when provoked, she has a nasty temper, and unleashes her frightening and monstrous-looking robotic self.

Dr. Locus is Melody's creator and father. In Bradventure, he tries to steal Jenny's data in order to make Melody just as powerful and advanced. Melody is upset with her father and highly disapproves of his evil schemes, running away from him in No Harmony with Melody so she could spend time with her crush, Brad.

Melody developed a crush on Brad from the moment she met him in Bradventure. She returned to see him in No Harmony with Melody, and for a day, they went on a date in Tremorton, becoming rather close, as Brad returned her feelings. They talk and hang out, and Melody kissed him once. However, when Melody became enraged while fighting with Jenny and revealed her true terrifying and vicious robot form hidden beneath her pretty exo-skin, Brad became terrified of her. Upon realizing how frightening she is to everyone, Melody tearfully states that she does not belong in Tremorton, and flies away. She was never seen again in the series.

Jenny was suspicious of Melody spending so much time with Brad, fearing for his safety, and tried convince him that Melody is evil because she is a robot created by Dr. Locus. Jenny provoked her, making Melody snap with uncontrolled rage and transform into her true monstrous robot form. After conceding to the fact that she is feared by everyone, including Brad, Melody leaves, never to be seen again. Jenny discovers that although Melody was created to be a monstrous villain by Dr. Locus, she never really wanted to be evil, and felt sorry for her. 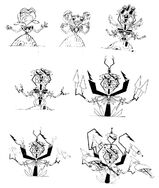 An official artist’s sketch of Melody transforming into her true robotic form.
Community content is available under CC-BY-SA unless otherwise noted.
Advertisement