Following rules
Being ridiculed
Not getting paid for heroics

Misty (also referred to as The Illusive Mystery) is a ninja alien hero who later revealed her true villainous side. She possesses ghostly psychic powers and advanced martial arts skills.

Misty's powers are primarily psychic in nature, with the ability to read and control others' minds, as well as an ability to turn into a cloud of ghostly mist. She also has advanced martial arts skills and is referred to as a ninja.

Misty makes her first appearance in "Teen Team Time," as a member of the Teen Team. As the Teen Team's is a parody of the Teen Titans of DC Comics, Misty is a rough analogue in powers and temperament to Raven. However, Misty has a bit of a mean streak — she doesn't like to relate to "normals", only does her heroics/villainy for pay.

In "Teenage Mutant Ninja Troubles", she attends Jenny's school but quickly gets expelled when she goes a little too far when pranking and getting revenge on the Crust Cousins, becoming megalomaniacal and sadistic.

Later, in "Mist Opportunities", she and Jenny clash and seem to become enemies when Misty reveals that she is actually quite villainous, greedy, reckless, uncaring, and cruel. She performs heroic deeds only if she is paid, and doesn't truly care about the citizens of Tremorton. She nearly let the city get completely destroyed by a monster, with absolutely no remorse, and became reckless, threatening to use a school bus full of children to slam the monster against a hospital building. Jenny and Misty get into a fight over this, with Misty nearly destroying Jenny out of anger. When Jenny sadly mentioned that she thought they were friends, Misty flew away in a huff, furiously stating that the only reason she doesn't destroy Jenny is because no one is paying her to do it. Misty is never seen again in the series after this. 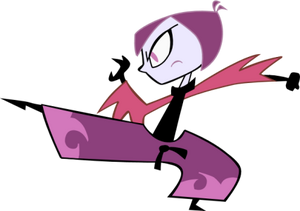 Misty has a scrawny body, with pale lavender skin, purple hair and purplish-pink eyes. She wears purple and black karate clothes, with gloves and shinobi footings.

Misty typically has a calm, cool, calculating demeanor, and tends to be overconfident in her abilities, as well as mischievous and vengeful once angered. She was a kind and loyal friend to Jenny when they first met in Teen Team Time, and enjoyed hanging out with her on Earth as teenage girls. However, when Misty returned in Teenage Mutant Ninja Troubles, she attended Jenny’s school and was picked on by the Crust Cousins, prompting her into starting a prank war with them that shortly grew out of hand due to Misty’s vengeful nature. Misty showed a dark, sadistic and cruel side of herself in this episode, proving to be a megalomaniacal bully. She invaded Brit and Tiff’s minds in order to exploit their worst fears, giving them nightmares in the process (whilst laughing evilly), then mercilessly tormenting them later at school in attempt to get revenge and frighten them. For this, she was expelled by the principal of Tremorton High. In her ruthless, power-hungry quest to get revenge on the Crusts, Misty was also a bad influence on Jenny, encouraging her to join her in tormenting Brit and Tiff, which Jenny later regretted when she realized how much of a bully Misty had become. Misty’s cruel, vengeful, and hot-headed behavior worsened in Mist Opportunities, when she became truly villainous, reckless, selfish, and greedy, refusing to defend the people of Tremorton and do her duties as a “hero” unless she was paid. She became Jenny’s enemy after viciously beating her up, threatening that she would have destroyed her if she was paid to do it.

Misty's first appearance in Teen Team Time, with a paler complexion and a different uniform.

Add a photo to this gallery
Retrieved from "https://teenagerobot.fandom.com/wiki/Misty?oldid=18712"
Community content is available under CC-BY-SA unless otherwise noted.