The Wiki of a Teenage Robot
Register
Don't have an account?
Sign In
Advertisement
in: Characters, Heroes, Humans,
and 3 more

"It Came From Next Door"

White (red when she was younger)

Jenny
Her creations
Her sister
Science

Dr. Noreen "Nora" Wakeman is the deuteragonist of My Life as a Teenage Robot.

She is a brilliant scientist specializing in robotics, Jenny's mother, and creator of the XJ series.

It is shown in the episode "Armaggedroid" that Dr. Nora Wakeman used to work for Skyway Patrol in "The First Intergalactic War", and was on many magazine covers, venerated as a renowned scientist. After Armaggedroid was defeated, she started the XJ series.

Dr. Wakeman has appeared in the pilot episode "My Neighbor Was A Teenage Robot" as an aged woman with styled blonde-gray hair, wearing clear stylized glasses with a white button-down lab coat and turtleneck. In the series, her appearance is amended to her characteristic white updo, pointed nose, red lab goggles, black turtleneck, and yellow button-down lab coat with matching heels.

Dr. Nora Wakeman comes off as a lively and exciteable woman, devoted to her robotics science and defending Earth from intergalactic terror. She is typically seen building gadgets, reading science articles and newspapers, drafting plans, or testing Jenny's robotic abilities. When in danger, she's usually the first to jump into action, standing her ground without hesitation.

Nora has always treated Jenny more like an actual daughter instead of simply a robot she invented. She serves as a typical loving mother to Jenny, concerned for her safety and well-being, but often calling at inopportune times for Jenny to save the Earth, and inadvertently embarrassing her in front of her friends. Initially, Wakeman kept XJ-9's existence a secret, insisting that the young robot remain in her room while not defending the planet. But Jenny's loneliness and misery soon prompted Wakeman to change her mind. As a result, she enrolled Jenny in high school to learn alongside other teens and make friends.

As the series progressed, Nora treated Jenny more and more like a normal teenager (while still acknowledging that Jenny is technically robot and not a human).

Dr. Wakeman is often rather annoyed with Jenny's next-door friends for constantly distracting her from her mission as a superhero. Nonetheless, she respects Brad and Tuck and understands that they are close and dear friends of her daughter, and approves of her socializing and adventuring with them on a regular basis as long as she doesn't abandon her duties.

Dr. Wakeman and Sheldon both care deeply about Jenny, and have used their advanced scientific talents to assist her in fighting villains, especially the Cluster. They worked together to create a portal device in Escape from Cluster Prime in order to recsue Jenny. In Attack of the 5½ Ft. Geek, Wakeman sees Sheldon and tells Jenny that she approves of her "dating" Sheldon. In Good Old Sheldon, an aged Sheldon flirts with Dr. Wakeman, developing a crush on her.

A boyfriend of Dr. Wakeman who appeared in Mama Drama. Wakeman liked Marty very much and enjoyed her dates with him, but after Jenny misunderstood his eccentric personality and convinced her that he was an evil psychopathic villain with intentions to harm her, she allowed Jenny to attack him. It turned out that Marty wasn't evil at all; insulted by Jenny and her mother's false and paranoid accusations, he deems Nora's family "too creepy" for him, and breaks up with her.

Dr. Wakeman's rival, a fellow scientist who is often competing with her to create better inventions and robots. Wakeman has a rather bitter rivalry with Mogg, and often accuses him of stealing her inventions. 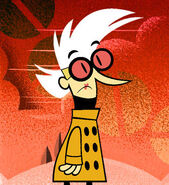 Dr. Wakeman in winter gear, seen in A Robot For All Seasons