The Wiki of a Teenage Robot
Register
Don't have an account?
Sign In
Advertisement
in: Characters, Heroes, Aliens,
and 6 more

The Amazing Orion is the leader of the Teen Team, appearing only in "Teen Team Time".

Orion is the leader of the Teen Team, known to be quite responsibile. He takes his job seriously and cares about his friends. Despite being serious about crime fighting, he also has a more friendly side. 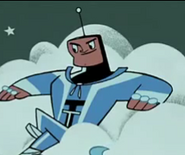