The Wiki of a Teenage Robot
Register
Don't have an account?
Sign In
Advertisement
in: Characters, Heroes, Male Characters,
and 6 more

The Stupendous Squish is a member of the Teen Team. He has the power to squish and morph into anything. He appeared in the episode "Teen Team Time". 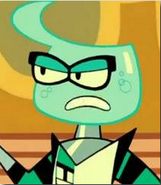