The Wiki of a Teenage Robot
Register
Don't have an account?
Sign In
Advertisement
in: Characters, Male Characters, Main characters,
and 2 more

View source
watch 01:40
The Sandman Will Keep You Awake - The Loop
Do you like this video?
Play Sound

My Neighbor was a Teenage Robot

Tuck made his debut appearance in My Neighbor was a Teenage Robot.

Tuck is a young boy with apricot-colored skin, black hair, and dark-colored eyes. He normally wears a red shirt with a black collar and a black stripe in the middle, blue jeans, and black shoes.

Tuck had a different appearance in the Oh Yeah! Cartoons pilot, "My Neighbor was a Teenage Robot". He has green eyes, wears a red baseball cap, a white T-shirt, green pants and red shoes.

Tuck is the young protagonist introduced in It Came From Next Door. He has a hyperactive personality and is easily excited.

Brad is Tuck's older brother. Even though Brad is the oldest, Tuck is shown on occasion to be more rational. However, Brad usually ignores Tuck's ideas (seeing as he is the older brother and assumes he knows better), and the two display typical sibling rivalry, disagreeing and arguing occasionally. Like most younger siblings, Tuck can be a nuisance to Brad due to his childish ways. Even so, Brad and Tuck are almost always hanging out together outside of school, and Brad cares about his little brother very much.

Jenny is Tuck's friend and next-door neighbor. When they first met in the episode It Came From Next Door (as well as the pilot, My Neighbor was a Teenage Robot), Tuck was afraid of her and thought she was evil, but after he witnessed her destroying an asteroid, he thought she was awesome once he discovered that she was a superhero and defender of Earth. The two have been close friends ever since, and Tuck enjoys joining Jenny, his brother Brad, and their friend Sheldon, when they go on adventures. Tuck also tends to rely on Jenny to help him with problems he faces, and Jenny occasionally becomes exasperated with him.

Tuck often causes trouble for Sheldon, and they don't talk to each other much due to Tuck being younger. However, they often go on adventures together, and are still good friends. Tuck is also an avid admirer of the Silver Shell, who is, in fact, Sheldon. Tuck aspires to be the Silver Shell's sidekick as well, convincing Sheldon to let him be "The Tin Can" and fight crime with him in A Pain In My Sidekick. 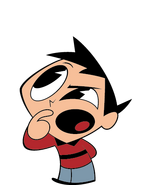 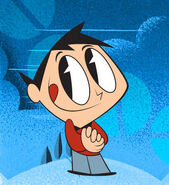 Tuck screaming in fear while held hostage by Vexus.