The Wiki of a Teenage Robot
Register
Don't have an account?
Sign In
Advertisement
in: Characters, Robots, Heroes,
and 6 more

The Cluster
Her mother Vexus

Her mother’s treachery
The Cluster

Vega is the daughter of Vexus and the current ruler of Cluster Prime. She is voiced by Thora Birch.

Vega is the former princess, and current queen of The Cluster, and the estranged daughter of the former Queen Vexus. Vega had befriended fugitive Jenny, after Jenny accidentally entered Cluster Prime through a portal device Vexus left behind. She and Jenny are similar, as Vega is also a teenager and has a group of robot friends that look and act just like Jenny's friends. Originally, Vega was unaware of her mother's evilness and believed her when she framed XJ-9 for stealing all of the golden computer chips. However, after discovering that all the computer chips were actually hidden in her palace, she realized that Vexus was behind the whole scheme. She and Jenny both fought against Vexus and got her to admit the crime. Vexus was later dethroned as queen and abandoned the planet, and Vega took over. Vega asked Jenny to stay in Cluster Prime, but Jenny claimed that she belonged on Earth. Vega understood, but she wanted Jenny to come visit her sometime; Jenny happily promised to do that when she could.

Vega has dark burgundy "hair" with two thin black antenna-like ends sticking upward. Vega's eyes are seen as yellow colored with two black dots for pupils, but closer inspection shows they are green. She has a thin V-shaped chest plate with a yellow orb in the center, and a thin black waist. Her arms have four segments, and she has thin black fingers. Vega's skirt is striped burgundy and lime-green, and she wears burgundy pants and black boots. Her special weapon is a plasma sword.

When Jenny came to Cluster Prime, Vega saw her as a friend, even when she figured out that Jenny was XJ-9.

Vega's final moment for the rest of the series. 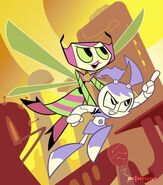 Vega in her theme color shade appearance as seen in the opening in "Escape from Cluster Prime".
Community content is available under CC-BY-SA unless otherwise noted.
Advertisement