The Wiki of a Teenage Robot
Register
Don't have an account?
Sign In
Advertisement
in: XJ robots, Characters, Female Characters, Robots

XJ-10 is a theoretical member of the XJ android model series. She was never created, and only seen once in Dr. Wakeman's blueprints. XJ-10 was only hinted at twice in the series, and is generally used as a gag.

At the end of the episode Sibling Tsunami, XJ-10 is jokingly mentioned to Jenny and her sisters by Dr. Wakeman.

In the episode A Robot For All Seasons, Dr. Wakeman is seen intently studying the blueprints for XJ-10, before hiding them just as Jenny enters the room. It seemed Dr. Wakeman was planning XJ-10’s creation after she believed that Jenny had gone rogue, indicating that Nora might have used XJ-10 to destroy the "rogue" Jenny and replace her as a crime-fighting robot daughter if Jenny had not been proven of her innocence. But considering that Jenny (with the help of Sheldon) proved her innocence and efficiency at the end and that she had not gone rogue, it is likely that Nora cancelled the XJ-10 project.

Judging from the blueprints, XJ-10 would have had a triangular build with more pointed features and crab-like claws. 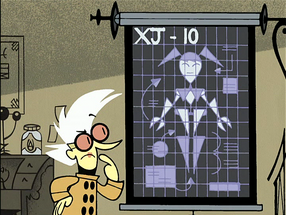 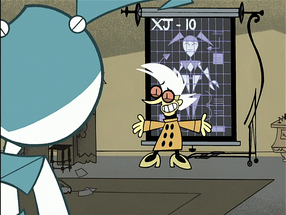